I have been riding the new electric scooters and bikes around San Francisco.

At $1 per ride + 15¢ / minute, I can often jump on a scooter and quickly get to my destination for under $3. It’s an awesome deal, but it’s made me wonder about the economics of these scooter companies.

I’m sure all of the scooter companies are losing money right now, but to get a sense of their feasibility I made some estimates of their unit economics.

Bird pledges to not add more scooters if rides per scooter per day is below 3.

In San Francisco, a common weekday pattern is for scooters to go from outside residential areas to FiDi in the morning then back in the evening. On weekends, the scooters seem like they are constantly in usage.

I imagine Santa Monica has more use over the course of the day with lots of tourists and businesses that are spread throughout the city.

This is also inline with the calculations of various scooter companies who have claimed to have X rides since launch or to have Y miles ridden in the last month.

From my ride history in San Francisco, I average about 1 mile every 10 minutes or an average speed of 6 miles per hour.

Bird claims the majority of rides are under 2 miles long. So I figure 1.5 miles is a good guess at an average.

Bird’s standard pay to charge a scooter is $5. But the bounty can be as large as $20 per scooter. Motherboard by Vice published an article detailing how some chargers game the system by hiding scooter’s to generate the $20 missing scooter bounty.

I am guessing that most of the time scooters will be picked up for $5. It looks like the scooter charging ecosystem is picking up quickly and with more chargers in operation the less the scooter companies will have to pay.

When you become a scooter charger, the company needs to send you proprietary chargers. I am guessing these are under around $30 with shipping. So if each person charges at least 30 scooters, that comes out to less than $1 per scooter.

This article from The Atlantic covers the developing ecosystem and culture around charging Bird scooters.

I called a bike store in San Francisco that claims to contract for repairs for Bird and got the following quotes for what he claimed were the most common repairs:

I found this harder to estimate, but LimeBike claims that less than 1% of scooters are vandalized or stolen.

I often run into scooters that are malfunctioning, but it’s really hard to extrapolate from this experience.

This Quartz article covers how the scooter companies are buying scooters from Chinese companies and then rebranding them. Ninebot, a subsidiary of Chinese electronics giant Xiaoami, makes the Mi Electric Scooter that Bird and Spin are using which retails on Amazon for $500.

Assuming a discount in buying in bulk from China, I’m guessing Bird and Spin could buy their scooters for near half of the US retail price.

As always, Alibaba has some helpful search results.

Again, this is from LimeBike’s claim that less than 1% of scooters are vandalized or stolen. But Spin says that it is losing more than 2.5% of it’s scooters each month.

It might be helpful to also include scooter’s impounded by the policy in this number. But that doesn’t appear to be a major problem. San Francisco’s transit agency claimed to have taken 66 scooters in one day but there are not reports of similar roundups.

LimeBike’s app consistently shows scooter’s that have been impounded but I haven’t tracked how that number is changing over time.

Number of Scooters in San Francisco

San Francisco will start trying to cap the scooters per company at 500. But Bird has claimed to have over 1,600 scooters in San Francisco as of the end of April.

Scooter companies likely need to pay for insurance in case a battery blows up or a rider is injured while riding a scooter.

Bird recently had to pay $300k to the city of Santa Monica for operating without the proper permits.

San Francisco will begin charging a $5,000 permit application fee with an annual $25,000 fee to operate 500 scooters in the city.

This data could be useful to event planners, real estate developers, other transit companies, and advertisers.

Scooter companies could show ads within the app or sell auspice on the scooters. Ads could be targeted based on rider’s location history so the ads could be attractive for local businesses.

Sell other modes of transit

If a scooter app becomes a go to transit app, the app could also offer different modes of transit e.g. Uber, Lyft, etc. and get referral fees for the transit.

I calculate that with these estimates, a scooter company can make $2.58 per scooter per day. In other terms, a scooter’s lifetime value is $155.

So with 1,500 scooters in San Francisco, a scooter company would be taking home ~$4k per day and $1.4MM per year. These are respectable numbers, but at that rate it will take a long time to show a return on investment on the 100s of millions that have been invested. 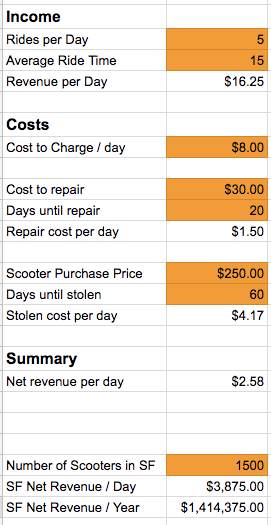 Screenshot of my Google Sheet

I think the most impactful variable on that sheet is Rides per Day. If the company, can increase Rides per Day from 5 to 15, the company will go from Net Revenue of $1.4MM to $20MM.

So these companies profitability will be highly dependent on scooter utilization. I am guessing there will be areas like college campuses where scooter’s will be a definite win, but I’m not sure if San Francisco will work out.

If you have any thoughts on this, feel free to shoot me an email :).

Thanks to Gordon Wintrob for helping me think this through.